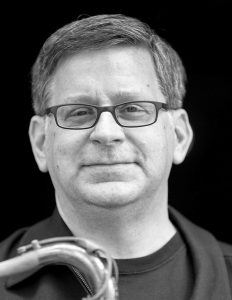 Steve Griggs (b. NYC, 1960) earned certificates in Narrative Non-Fiction and Arts Management from the University of Washington, a Master of Business Administration in Management Information Systems from Pace University, and a Bachelor of Arts in Saxophone Performance from the University of Illinois. Griggs is a Professional member of the Jazz Journalists Association, Jazz Education Network, American Society of Composers, Authors and Publishers, Ensemble member of Chamber Music America, former President of the Friends of the Seattle Public Library, a former board member for Spruce Street School and Puget Sound Community School. He currently works as an Administrator at Music of Remembrance, a chamber music organization founded in 1998 that remembers the Holocaust through historic and newly commissioned music.

Musically, Griggs is an award-winning composer, producer, performer, and publisher with six commercial jazz recordings of his music on his independent, self-produced Hip City Music label. John Coltrane’s drummer on A Love Supreme, Elvin Jones, is featured on two of Griggs’ records that received airplay across the United States and on Voice of America. A live recording of Griggs at Jazz Alley, recorded by Jim Wilke (the same audio engineer who broadcast Coltrane in Seattle during 1965) reached #17 on the Gavin national jazz radio chart. Over the past 40 years, Griggs performed professionally in New York, Chicago and Seattle.

In the Northwest alone, he performed at festivals, fairs, clubs, concert halls, museums, libraries, and historic sites. His live performances have twice earned an Adventurous Programming Award by Chamber Music America and the American Society of Composers, Authors and Publishers. Griggs is the featured saxophone soloist on the soundtrack for the Microsoft Xbox 360 video game Halo 3: ODST which sold more than 6 million copies worldwide and won awards for Best Original Score at the 2009 Spike Video Game Awards and Best Original Score and Sounds in the 2009 Czech Gaming Awards.

Griggs wrote and administered $91,0000 in grants from Chamber Music America, the National Park Service, 4Culture (King County Arts Commission), and the Seattle Office of Arts & Culture to create, present, and promote his original social justice and jazz projects. The Seattle Channel recorded Griggs’ music and narrative program based on the police killing of native carver John T. William and broadcast it on Front Row: Steve Griggs Ensemble present Seeing John T. Williams. His music and narrative program inspired by Chief Seattle and the Duwamish River, Listen to Seattle, premiered at the Duwamish Longhouse and was reprised at Seattle’s Town Hall on Indigenous Peoples’ Day.

Griggs’ historical research and musical accomplishments have been mentioned in The John Coltrane Reference (2013), The River That Made Seattle (2020), Wild Isle in the City (2020), and Life and Jazz Stories (2021).